The 8-limbs of Yoga

The ‘eight limbs’ or ‘eight parts’ refer to eight different aspects of the yoga practice defined by the great sage Patañjali as a method for reaching the “state” of yoga. This ‘state’ of yoga is interpreted as the leading of a meaningful and purposeful life. The eight limbs each offer guidance and approaches on how to live such a life. Ashtanga yoga is the yoga style that is based on these 8-limbs, where aṣṭāṅga refers to much more than just a series of postures and breathing. Aṣṭāṅga literally means ‘eight limbs’ or ‘eight parts’.

What are the 8 limbs of yoga?

According to Patanjali’s Yoga Sutras, there is an eight-fold path approach to practicing yoga, known as the ‘Ashtanga Yoga System’ or ‘8 Limbs of Yoga’ (the word ‘ashta’ means ‘eight’ and ‘anga’ means ‘limb’). These eight limbs are:
YAMA – How you act towards others
NIYAMA – How you act towards yourself
ASANA – Physical yoga poses
PRANAYAMA – Breathing techniques
PRATYAHARA – Withdrawal of the senses
DHARANA – Concentration
DHYANA – Meditation
SAMADHI – Complete integration

These eight limbs could be seen as steps or rungs on a ladder, each step deepening the yogic practice. Yoga practitioners often start with building a physical yoga practice, ASANA. After some time they might become interested in other limbs such as the breathing techniques, PRANAYAMA or meditation, DHYANA. At the same time yoga practitioners might begin to become more interested in other limbs such as how they act towards themselves, NIYAMA, or others, YAMA. Whatever your level of experience and way you became interested in yoga, it can be useful to learn about all the eight limbs. Decide for yourself how you can use these guidelines to meet your own goals and fit your ideal lifestyle.

It’s important to understand that this particular yogic philosophy is just one of many philosophies, others including Buddhism and Tantra, both of which are equally as rich and fascinating.
Starting with guidelines on how you act towards yourself and others, and moving through various physical yoga practices, breathing techniques and states of meditation, the practitioner is said to eventually come to complete integration of all the limbs and rest in the last limb of bliss, Samadhi

Patanjali was a writer and thinker from India. He is historically connected to the Yoga Soetra’s, one of the most important writings in the yoga literature.

The word “yoga” comes from the Sanskrit word yuj, which can be translated into “yoking” or “union”. When a yoga teacher in training learns the essence of this word, it is often taught that in yoga we are celebrating the union of our mind, body, soul, and spirit. What is often omitted is the reason why it’s in our interest to make this happen. To get this reason, we must go back even further.

According to Vedanta (from the Veda’s; most holy and oldest Hindoe writings), everything started with purusha, which is pure being. You can also refer to purusha as divine essence, state of perfection, or infinite love. Within purusha, there is no suffering because there is nothing material and thus, no division. When purusha creates, that creation becomes known as prakruti. Everything we know and understand is prakruti. However, being a part of prakruti, we then forget that our essence is purusha. The process of “remembering” is found through chitta, which is the evolution of consciousness. Therefore, if we gather all the pieces of ourselves—mind, body, soul, spirit, emotions—we are more inclined to remember that we come from pure awareness.

Because we are prakruti, we suffer. Our desires, needs, expectations, and forgetfulness all cause us to suffer. Yogis throughout time have pondered the question as to how we can transcend human suffering. Patanjali is no different. He created the Eight Limbs of Yoga as a template to help us transcend the confines of our ego and to reach self-realization. The Sutras of Patanjali

The word sutra means “to thread or weave” just as the English word suture means: “to stitch together”. These Sutras (or writings) of Patanjali are divided into four sections. The practice of yoga comes from section two called the Sadhana Pada. Ashtanga means “eight” and refers to Patanjali’s eight limbs or branches of yoga. Each branch, when practiced, is designed to help the practitioner live a more disciplined life with the goal of alleviating suffering.

Patanjali’s goal for us is that through these practices, we can still the mind and merge into oneness with the divine. When we awaken to divine essence, we are able to live fully from a place of authenticity. We are able to discern who we really are and what our purpose is. We don’t have to look to the exterior to determine right from wrong, all the answers are found within.

The ‘eight limbs’ outlined in the The Yoga Sutras of Patanjali is a required read on most Yoga teacher training programmes a especially in the Vinyasa Yoga Teacher Trainings we offer at TULA this book is discussed extensively.

The good things happen in the comments below. Please share your thoughts, stories and questions 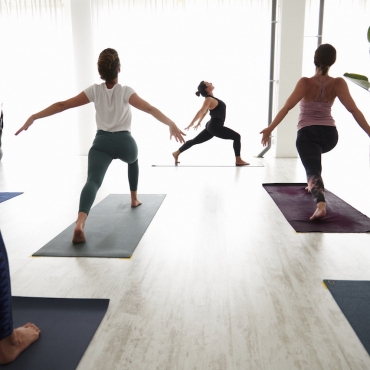